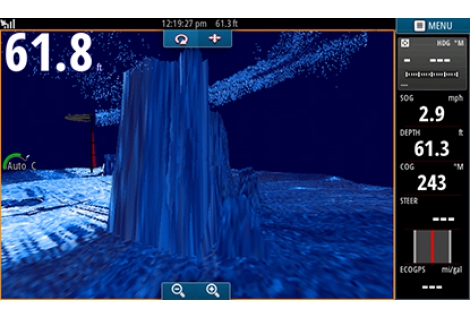 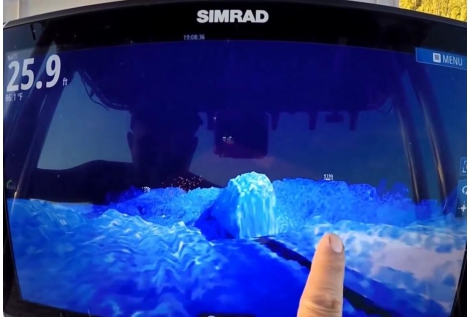 Lowrance® 3D
3D StructureScan is equipped with a multi-beam sonar technology that produces clear images with astounding detail, converting the analysis of the underwater terrain and the structure for the containment of fish in high-resolution displays, at 180 degrees, and three-dimensional. The realistic 3D scans are displayed on the fishfinder / chartplotter Lowrance HDS series January 3 used in combination with the transducer 3D SidesScan Skimmer® and the StructureScan® 3D form.

Sonar images easy to understand
Views 3D from any angle thanks to ScanTrack ™ control for the rotation, tilt and pan, using the touch screen controls and preset viewing positions and easy to use.

rapid identification of the main fishing areas
3D StructureScan® allows anglers to understand more easily the location of fish and structure for containment relation to the vessel. Thanks to the large scanning radius of 180 degrees, going slowly and with engine idling toward a potential fishing area, anglers will find key areas, such as sudden changes in depth, peaks, ditches, boulders accumulations of branches concentrations and foliage, algae, wood parts based on algae, shipwrecks and more.

Image clarity unmatched SideScan
To ensure even sharper SideScan views, the design of the 3D StructureScan transducer has been improved with the addition of new sensors for superior image quality.

Even broader high-definition 3D scanning (HD)
The profiles below the water surface can be observed to the boat's sides: up to 600 feet port and starboard with incredibly detailed views and high definition. 3D StructureScan® offers multiple views, including two-dimensional views DownScan StructureScan® Imaging ™ and HD, as well as new realistic three-dimensional views. Using corners with views preset or the control mode for the rotation, tilt and pan ScanTrack ™, you can adjust the view and perspective under the boat. The combination of 3D and HD customized views offers a greater awareness of the location of fish based on the coverage and optimizes the search of fishing areas.

Scanning references Leading Edge ™
The Leading Edge ™ scanning references offer clear graphic illustrations of the sonar beams that strike the bottom contours. The depth and extent of the last analyzed area are indicated by symbols in the form of red fan directly below the boat. Leading Edge also includes a depth scale showing in greater detail the depth when enlarging the images, thus giving a better perception of the depth at which is located the target.

Identification of targets SelectScan ™
SelectScan ™ automatically apply a shadow to cover for the containment of fish and suspended targets in a contrasting color with the color palette selected, making it faster and easier identification of the target than ever before.

Control Vertical Enhancement
Vertical Enhancement is a user selectable scale which is applied to the screen and that provides more details on vertical drops and the critical changes of the isobaths, which in this way will be more easily identifiable in relation to the surrounding underwater terrain. Vertical Enhancement makes it more visible even the smallest variations of depth.

Overlay waypoints
The display of fishing areas, the structure and other underwater elements will be even clearer thanks to overlay the waypoints. You can use the keyboard to save the waypoints of a waypoint at the boat position or switch to cursor mode and save a waypoint on targets, bait or specific coverages.

Settings of automatic 3D images
The settings of the 3D images are automatically adjusted in the HDS January 3 default configuration and the StructureScan 3D form. You can adjust the transparency of the surface and contrast settings using the scroll bar on the screen. The transparency of the surface option reduces surface clutter by decreasing the sensitivity of the receiver near the surface. The contrast lightens or darkens the color palette for easy viewing of fish and structure.

Send to a friend