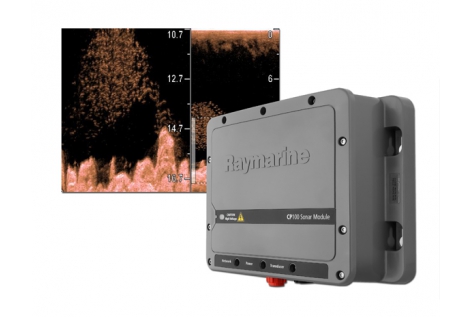 After the success of the fishfinder Dragonfly winner of prestigious awards, the CP100 now brings CHIRP DownVision ™ technology to Raymarine multifunction displays. LightHouse user interface using the CP100 can be networked with multifunction display-Series, C-Series, E-Series and gS-Series (the LightHouse software version v7.35 or higher is required. Click here to download the software for free).
unprecedented detail with CHIRP technology
The sounder module CP100 brings DownVision CHIRP technology to Raymarine multifunction display shows all that is under the boat with a clarity equal to that of a picture, allowing you to see the fund structures with exceptional detail and identify the fish simultaneously.
Unlike conventional echo sounder modules, the CHIRP of the CP100 technology transmits through a wider spectrum of frequencies per pulse, ensuring very high resolution images.

Images such as photos of the seabed and the structures using CHIRP technology DownVision Raymarine.

DownVision ™ performance up to 182 meters deep.
CHIRP two separate channels that allow simultaneous viewing of fish at a very high contrast and clear images of the CHIRP DownVision structures such as photos.
Networked the CP100 with the latest generation of Raymarine multifunction displays. From the a-Series to gS-Series CP100 shows the underwater world with a resolution up to 1280 x 800 pixels.

Send to a friend